Due to my usual lack of foresight, ceiling work has stalled while I await delivery of some fixtures from etrailer.com.  Specifically, I ordered recently a bathroom ceiling exhaust fan and light.  I want to have the fan in my hands to better determine what the ducting will need to be and to install it around the insulation already in place.  Again I had placed the proverbial cart before the horse.  Such is a maiden trailer restoration project.  Next time I will proceed more thoughtfully.

So while I wait,  how about salvaging the old furnace stack to use for the fireplace?  Though heavily rusted, the stack appeared to be solid, but a POR – 15 treatment was in order.  POR is the best stuff ever to stop rust dead in its tracks and to prevent further degradation.  it is a four-step process but well worth the effort.  Check it out: 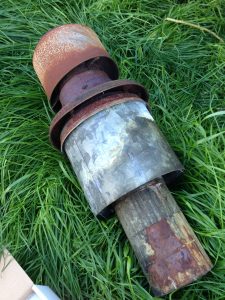