Movin’ on down the line

Looks like I finished my interior birch panels in the nick of time.  My landlord is selling out, deciding to unload his 2.5 acre parcel in the Santa Rosa city limits.  This may be the time to do it as last fall’s fires resulted in a glut of vacant lots now coming on market.  If I could afford to buy this spread I would.

It appears I have found a new home, though, for my two girls.  It is just a mile away, semi-rural with two cement slabs and the freedom to continue work at my leisurely pace.  I will provide more detail next week as I relocate my Spartans.

In the meantime, here are some more panel pics: 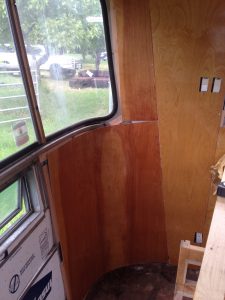 Working with 1/8″ panels in rounded corners which also lean away from the floor was very tricky. Initially I attempted this with a single piece but finally had to admit it was beyond me. I used two pieces.

Using my hand to improve the lighting for this shot. I think it turned out pretty good.

Now it is time to attempt the restoration of old cabinets. 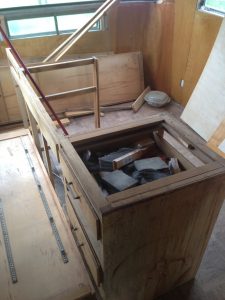 This may tax my skills to the limit