All Twerk and No Play

Good morning.  Happy Mother’s Day.  It’s a weekend –  that time when this chef logs lots of stove time and not much trailer action.  Last night I watched Justified on Amazon (yep, the new Prime time) and this particular episode concerned some redneck Meth cooks.  As they sat around their campfire, sipping whiskey and polishing their firearms, a rival reprobate showed up to advise them that if they didn’t get out of the meth business, their “cookhouse” was liable to go up in flames – an occupational hazard of that dubious profession. As their semi-literate exchange took place, the camera panned the scene and I’ll be God-damned if the subject in question wasn’t a 1957-ish Spartan Imperial Mansion.  Though it sported an unfortunate paint job as befits it’s knucklehead occupants, the forward-slash front end and scalloped siding were unmistakable Spartan flourishes.  Here was proof positive.  I am now officially trailer trash.  What’s more, I am of the toothless meth head  variety.  Has it really come to this?  Before the episode was done, the threats were made good upon, and, one Molotov cocktail later, there was one less Spartan on this planet (yes, they actually blew it up.  Shame.).

Anyone who has bought a new car is familiar with this experience.  My Google search reveals that it goes by a number of names – the Baader-Meinhoff phenomenon, frequency illusion, confirmation bias and observer-expectancy effect (who comes up with this shit?).  If you buy a red Jetta, suddenly you will notice tons of them.  After I bought Sparta, I saw one on the way to work at a place I had driven by a hundred times and it had previously escaped me.  And now, it makes a cameo appearance on TV.  Could there really be that many Spartans out there?  No.  They didn’t make that many.  But, it’s funny how the brain works.

Ooops. Where does the time go?  It’s time to tuck my mullet up under my chef’s toque and get to work.

“I love what you’ve done with the place!” 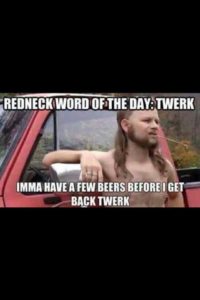