A word about quality

In case you prefer not to hear me gripe about modern times, skip this post.  It will be a rambling diatribe from the embittered mind of a grumpy boomer (GB).  It will have nothing to do with actually restoring a vintage Spartan trailer but everything to do with why I have undertaken this task.  It concerns quality.  The word has been so badly abused by popular media, management tomes and marketing sales pitches that I am not sure anyone knows what it means.  Like the word “Natural”, often used to describe so-called sensible food choices these days,  Quality has been watered down to the point of meaninglessness.  In fact, “Google it” and you will find two significantly different, almost opposing, definitions.  Quality –

“The standard of something as measured against other things of a similar kind; the degree of excellence of something”.

“The totality of features and characteristics of a product or service that bear on its ability to satisfy stated or implied needs. Not to be mistaken for’degree of excellence'”.

Hmmm?  In one case quality is about excellence, in another it is about the ability to satisfy and shouldn’t be confused with excellence.  I would posit that excellence is a sort of “gold standard”, a benchmark if you will of something’s inherent goodness which has relevance over time.  It is tangible, often measurable.  On the other hand, when quality is defined as “ability to satisfy”, it no longer has as much to do with the product and has MUCH more to do with the consumer.   Once it is measured “in the eye of the beholder”, quality is suddenly negotiable and changeable over time, like a fad.  Here is how quality has changed over the years as observed by this grumpy boomer:

GB example #1 – A telephone:  In 1957 we had in my Fresno home a telephone made by Western Bell.  It looked exactly like this.  It was on a counter in our family room and had a very long cord which enabled my sisters to secret it away to

their bedroom when some “Dreamboat” called.  I cannot tell you how many times this phone came crashing to the ceramic tile floor due to my getting entangled in the cord while running about.  With nary a chip in its durable, space-age plastic housing, the phone occupied its rightful place in our dwelling for at least 15 years, about the time I started making furtive calls to some junior high crush.

Fast forward to 2016.  Here is a stock Internet photo (chosen among hundreds) of a desk drawer full of phones.  Until last year I had one that looked exactly like this.  I finally tossed them.  Looks a bit

like planned obsolescence or is it just a case of changeable consumer expectations or “implied needs”?

Without getting into the merits and many advantages of Smart phones, I would ask this:  Does a drawer-full of now useless phones, all less than ten years old, reflect upon quality improvements in the telecommunications industry OR their ability to sell us on the the latest and greatest features as being indispensable to us? I think Western Bell’s standard of quality looked a lot more like the first definition above ( a standard or degree of excellence) while modern phone makers think quality is the ability to meet rapidly changing consumer expectations which I will call the “new needs”.  The problem with new needs is that they are ever-changing and are not really needs at all.  They are wants.  But how many of us have cursed our Smart phone or even, I daresay, been tempted to throw it when a web page failed to download quickly? Hence, a drawer full of useless junk, a sea littered with plastic packaging and a blurry definition, at best, of what constitutes quality.

GB example #2 – Music :  Don’t worry, I am not going off on rap or the state of pop music today.  I tried that in an earlier post and probably ran off 90% of my audience under 31 – that leaves my two loyal kids.  No, here I am addressing not the content of today’s music but its fidelity.  No kids, fidelity isn’t just a worthy expectation of one’s marriage vows.  It is actually a quaint old reference to the quality of sound produced by a recording.  Back in High School my summer job was at a Hi-Fi shop in Fresno.  There, in the sealed demonstration room, with acoustics geared to maximizing the pleasure of listening, sat a stack of “High Fidelity” magazines.  These periodicals were dedicated to the pursuit of the best possible music quality and were there to be perused while hearing, somewhat awestruck, the deep bass achieved by Keith Emerson’s moog on “Lucky Man” through a pair of Bozak Concert Grands.  Now I am willing to bet that the vast majority of Americans have never had such an experience – at least, not those under, say, 30.  That is not to say that such listening rooms which demo extraordinarily life-like music no longer exist.  They do.  There is one right down the street from me here in Santa Rosa.  It is just that almost nobody cares and we can thank digital music, esp. MP3s for that.  Without getting too deep into the arcane discussion of analog versus digital (a tired and endless debate), lets just say this.  Forty years ago quality analog music sound production sought excellence and was measured meticulously in frequency response, harmonic distortion, bass response, etc.  It was sought after and paid handsomely for.  It mattered.  Today,  when it comes to their music, most consumers expect convenience, portability and quantity of storage with relatively little concern for measurable sound quality.  Listen to the fidelity of music reproduced on the average Smart Phone as played through a $19 pair of ear buds and you will get my point.  What is my point?  Only that the bar for quality once set by McIntosh for its state-of-the-art tube amplifier is vastly different than that set by, say, Beats headphones.  That consumers now value the latter way more than the former is demonstrated by the fate of the two companies.  Two years ago Dr Dre sold Beats, a maker of trendy though not audiophile-quality headphones, to Apple for $3 billion.  McIntosh?…it has hung around, first having been bought by a Japanese electronics giant and more recently by a boutique Italian audio company.  It will cling to life as long as there are still a few souls out there who value and understand sound quality.

GB example 3# – Furniture : OK, one more and I promise I will stop.  Four letters: I-K-E-A.  Almost everyone who has lived in an apartment has experienced IKEA.  If you have had the pleasure of assembling an IKEA product you know first hand how much they embody style over substance.  A dresser, for example, will feature lovely teak veneers over fused sawdust and, once assembled, it will look great with that clean Scandinavian aesthetic.  But I have yet to own one that didn’t start to fall apart withing a year due to simple wear and tear (that would mean exceeding its carrying capacity of twelve pairs of socks).  It’s no wonder.  The drawers sat upon plastic runners literally stapled to the dresser’s interior.  Here is an Internet fun fact which will tell you all you need to know about the furniture giant’s popularity which stands in stark and, often, hilarious contrast to its quality:

“IKEA’s Catalog Is More Popular Than The Bible. Every year, there are almost three times more copies of the catalog printed than the bible. They started printing the catalog in 1951 and it has since taken on a life of its own, consuming a full 70% of the companies marketing budget every year and developing a devoted fan base of people who analyze the images looking for obscure books in the bookshelves, Mickey Mouse references and cats hiding in the fake households. There are now 55 editions printed in 27 languages every year.”

Funny, even the catalog writers know the product is Mickey Mouse. That is way more than enough out of me today.  Maybe tomorrow I will better understand the point of this     rant. 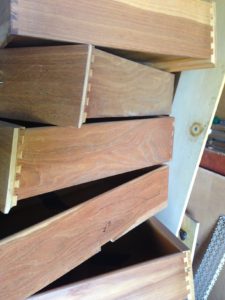 Postscript : May 25, 2016 – I have thought about it and I realize that yesterday’s observations are really about fear.  Fear of the accelerating passage of time, of the loss of a way of life which was familiar and understandable to me and of becoming irrelevant.  I wonder if that is what is really at the core of all this…this struggle against aging.  It is the fear of impending irrelevance.

© 2022 Restoring My Vintage Spartan to Glory